I find a lot of things confusing in this world, including The Wicked Messenger.

Apparently the messenger is some homeless guy that lives behind the town hall. He talks with his thumb. He’s one those guys that walks around with a sign that says the world’s coming to an end, apparently by fire this time, since “the soles of his feet are burning“. His neighbors tell him to stop being such a Debbie Downer, and that helps him see the errors of his ways. I’m being a bit flip of course, but this song is definitely a conundrum. 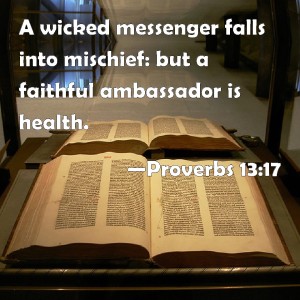 Not surprisingly, given the plethora of Bible references on John Wesley Harding, Wicked Messenger was heavily influenced by the Bible.

“A wicked messenger falleth into mischief/But a faithful ambassador is health.”

John Gibbens argues that “the wicked messenger is the counterpart to the holy messenger, Saint Augustine”.

As pointed out by Robert Shelton in No Direction  Home, much of the song is made up of arcane biblical phrases.  The place (or I guess the person) the messenger is coming from, Eli, the name of a priest in the Book of Samuel.  The messenger doesn’t return often, but rather “oftentimes”. The “seas began to part”, is a reference to the story of Moses.  “Opened up his heart” brings to mind  Acts 16:14: “the Lord opened up her heart”.

I think this song, more so than the many other songs on the album for which commentators have made the same argument,  could be  at least partially about Dylan himself. It’s pretty easy to see it has Dylan  criticizing his old negative, highly sarcastic “long piece of vomit” Rolling Stone-era persona, especially in the lines “if you can’t bring good news/then don’t bring any”.

Although Wicked  Messenger doesn’t appear on any live or Bootleg Series collections, Dylan has played in quite a few times, especially during the early  2000s.  He played it often during his tours with the Grateful Dead. Below is from the Never-Ending Tour.

So did The Faces.

And The Black Keys.

There was a wicked messenger
From Eli he did come
With a mind that multiplied the smallest matter
When questioned who had sent for him
He answered with his thumb
For his tongue it could not speak, but only flatter

He stayed behind the assembly hall
It was there he made his bed
Oftentimes he could be seen returning
Until one day he just appeared
With a note in his hand which read
“The soles of my feet, I swear they’re burning”

Oh, the leaves began to fallin’
And the seas began to part
And the people that confronted him were many
And he was told but these few words
Which opened up his heart
“If ye cannot bring good news, then don’t bring any”