Drifter’s Escape really works. Dylan successfully walks the tightrope he consciously built for himself with this album (“What I’m trying to do now is not use too many words”), limiting the number of words while still telling and effective story. Drifter’s Escape while very succinct, still has a beginning, middle and end, and a transformation of the narrator’s plight. Unlike a few other songs on the album, it hangs together with repeated listens, balancing between being frustratingly vague and mind-numbingly simple.  And that’s not to mention the effectiveness of the music, and the killer harmonic solo at the beginning.

The legendary songwriter Richard Sherman, the co-author of many great songs such as Chim Chim Cher-ee and It’s a Small World, once said that a song “has to be a book on the head of a pin.  That’s what a good song is.” I think Drifter’s Escape passes that test.

Drifter’s Escape continues the outsider/outlaw imagery that dominates John Wesley Harding. The protagonist of the song has been arrested for some reason, a reason that remains a mystery even to him.  “I still do not know what is that I’ve done wrong”, he cries. Like the narrator’s of John Wesley Harding and As I Went Out One Morning, society in general/the authorities are out to get him, a frequent theme in sixties Dylan music. In Just Like Tom Thumbs’ Blues, Dylan sings of hipster Angel:

Now, all the authorities
They just stand around and boast
How they blackmailed the sergeant-at-arms
Into leaving his post
And picking up Angel who
Just arrived here from the coast
Who looked so fine at first,
But left looking just like a ghost.

Robert Shelton calls it “another tale of an outsider, threatened but not defeated by society” 1.  Wilfred Mellers also cites the outlaw imagery. 2

Shelton, as usual, provides some fine insight into the song.   He calls Drifter’s Escape “a transparent parable about a person, trapped by a role, who awaits a sentence of doom before a hostile crowd, when he is almost magically delivered from the courtroom…  the bolt of lightning could be Dylan’s [motorcycle] accident.” 3  Shelton also notes the song “recalls Hank Williams, the drifter being a victim of the music life nicknamed Luke the Drifter [an alias Williams used for certain songs, generally with a religious theme], whose lonesome chants have a similarly beseeching tone.” 4

Shelton, like both the writer of the Wikipedia entry for this song and Dylan commentator Paul Williams, note   the similarities to Kafka‘s stories of unjust persecution.

Many commentators have suggested that it’s God himself that saves the drifter with the bolt of lightning from the sky. Shelton notes the influence of the Old Testament in the rhythm and meter.

It’s not hard to imagine Dylan thinking about his own personal history while writing this song about an unjustly persecuted man. Having been venomously attacked by so many groups for simply following his muse to new areas – first by the folk traditionalists, then the political crusaders, then the anti-rock crowd – it’s easy to make the connection.

I also wonder if Dylan had his old favorite, Woody Guthrie, in mind as he wrote it. Many Guthrie songs echoed the same theme. See Ramblin’ Round, where Woody identifies with the drifter, and Hobo’s Lullaby, which contemplates the unjustified persecution of the drifter (Guthrie didn’t write Hobo, but recorded a popular version).

Drifter’s Escape was released as a single. 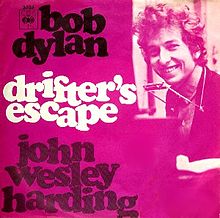 Dylan did not perform Drifter’s Escape live until 1992.  He played it for the first time, probably not a coincidence, the day after the Rodney King verdict.

The song is performed live in Dylan’s film, Masked and Anonymous. The character played by Penelope Cruz says “He’s great, I love his songs because they are not precise, they are completely open to interpretation”.    True dat.

Jimi Hendrix did a version.

Here’s a pretty good homemade video of an excellent performance.

“Oh, help me in my weakness”

Well, the judge, he cast his robe aside
A tear came to his eye
“You fail to understand,” he said
“Why must you even try?”
Outside, the crowd was stirring
You could hear it from the door
Inside, the judge was stepping down
While the jury cried for more

“Oh, stop that cursed jury”
Cried the attendant and the nurse
“The trial was bad enough
But this is ten times worse”
Just then a bolt of lightning
Struck the courthouse out of shape
And while ev’rybody knelt to pray
The drifter did escape