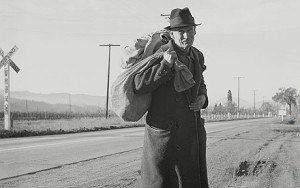 Hobo imagery appears in many well-known traditional songs, such as Guthrie’s I Ain’t Got No Home, Hobo’s Lullaby, East Texas Red, and Jimmy Rodger’s Waiting On a Train,  Hobo’s Last  Mediation, and Hobo Bill’s Last Ride. The hobo image is also included in several early Dylan songs, including Only a Hobo, Pledging My Time, and Bob Dylan’s 115th Dream. Bob Dylan himself has even been mistaken for a hobo.

Traditionally, the hobo is portrayed as a sympathetic, or at the very least, a light-hearted, carefree figure. Perhaps the most well-known hobo song, Hobo’s Lullaby, written by Goebel Reeves but made famous by Woody Guthrie, portrays the hobo as victim:

Guthrie’s I Ain’t Got No Home treats the hobo in a similar manner.

My brothers and my sisters are stranded on this road,
A hot and dusty road that a million feet have trod;
Rich man took my home and drove me from my door
And I ain’t got no home in this world anymore.

Dylan, who covered I Ain’t Got No Home at the 1968 Guthrie tribute concert, uses the hobo image in a similar way in both Only a Hobo and Man in the Street.  Other hobo-like characters that appear in Dylan songs, such has “Napoleon in rags” and the “mystery tramp”, are meant to be  to viewed sympathetically.

I Am a Lonesome Hobo changes that pattern up. This hobo is not a heroic figure at all. Written in the first person, the hobo describes himself as a pretty despicable person, who is sentenced to “wander off in shame”. Guido Biero, in his book Life on the Tracks, writes:  “the hobo is a simple metaphor for moral poverty”.

What did the hobo do to deserve his punishment?  In short, he was selfish, judgmental, and didn’t share. He didn’t live by the “golden rule”.

Like many of the songs on John Wesley Harding,  Dylan leans on the wisdom of the Bible.  This song is no exception, echoing familiar sentiments like “do unto others” (Luke 6:31),  “judge not” (Matthews 7:1-2), “Lay not up for yourselves treasures upon earth”  (Matthew 6:19).

Many commentators have noted a similarity between this song and the biblical story of Cain.

In the book of Genesis, Cain and Abel are brothers, the children of Adam and Eve. In a fit of rage and jealousy, Cain kills Abel. God punishes him by making him a “fugitive and a wanderer on the earth”. The similarities between Dylan’ hobo and Cain are very clear (see lyrics below). The Cain and Abel story influenced, to varying degrees, several other Dylan songs, including Every Gain of Sand, Not Dark Yet,  and Tweedle Dee & Tweedle Dum.

Dylan commentators commonly mention several other sources that might have inspired the song, including Arthur  Rimbaud’s My Bohemian  Existence,  Coloridge’s The Rime of the Ancient Mariner, and the Polonius character in Shakespeare’s Hamlet.

Like much of John Wesley Harding,  the song seems to be in part a repudiation by Dylan of his own mid-sixties persona, which was full of judgment and self-righteousness (e.g. Masters of War, The Times They Are a-Changin’, the interview with the Times reporter in Don’t Look Back).  “And hold your judgment for yourself / Lest you wind up on this road” is not a lyric the Like A Rolling Stone time-frame author would have delivered.

Dylan has never really had a mind-blowing philosophy of life (not saying he should),  but I’ve always though the final lines a bit pedestrian.

Live by no man’s code

And hold your judgment for yourself

Lest you wind up on this road

As Mike Marqusee author of Wicked Messenger wrote : “Some might find the statement of values not only explicit but banal.”

Julie Driscoll and Brain Auger give it a sixties-style treatment.

I am a lonesome hobo
Without family or friends
Where another man’s life might begin
That’s exactly where mine ends
I have tried my hand at bribery
Blackmail and deceit
And I’ve served time for ev’rything
’Cept beggin’ on the street
Well, once I was rather prosperous
There was nothing I did lack
I had fourteen-karat gold in my mouth
And silk upon my back
But I did not trust my brother
I carried him to blame
Which led me to my fatal doom
To wander off in shame
Kind ladies and kind gentlemen
Soon I will be gone
But let me just warn you all
Before I do pass on
Stay free from petty jealousies
Live by no man’s code
And hold your judgment for yourself
Lest you wind up on this road