I Contain Multitudes, contains a multitude of allusions to other works. I thought it would be fun to document as many as possible. Get comfortable, this will take a while.

Bob Dylan’s lyrics have always been chocked-full of allusions or outright borrowings. For example, Don’t Think Twice It’s All Right is very similar to the traditional song Whose Going To Buy You Ribbons. Restless Farewell contains many similarities to The Parting Glass. The Times They Are A’Changin’ includes a slight variation of a line from Matthew 19:30:

Dialog from TV shows and films. Stage plays. The blues. Newspaper articles. All are fair game.

On a general level, Dylan borrows a technique often used in the blues, sometimes referred to as “boasting”. Muddy Water’s Manish Boy is a well-known example.

All you little girls,
Sittin’out at that line
I can make love to you woman,
In five minutes time
Ain’t that a man

Dylan tosses in a few badass boasts in Multitudes.

I carry four pistols and two large knives
…
‘ll sell you down the river, I’ll put a price on your head

…
I sleep with life and death in the same bed

Many of Dylan’s newer songs, especially those on Tempest, his latest album of original material, also employ this stylistic device. I like it, it suits Dylan in winter.

Now let’s get into the specifics, starting with the title. “I contain multitudes” is a direct quote of Walt Whitman’s great poem, Song of Myself.

Contradictions. Dylan is certainly a man of many contradictions. Many an academic paper has been written on that subject. Here’s one.

Let’s move on to the first line of the song (I told you this would take some time). “Today, tomorrow, and yesterday, too”  could be a reference to the film by director Vitorio De Scia that starred Sophia Loren and Marcello Mastroianni. It won the Academy Award for best foreign picture in 1963. Dylan mentions Loren in his 1962 song, I Shall Be Free. He references the Mastroianni vehicle, La Dolce Vita, in Motorpsycho Nitemare.

“Balian Bali” – as most lyrics sites have it – could be a reference to a town in Ireland.  Balian Bali is also a beach in Bali, popular with surfers. Perhaps when the song is published on bobylan.com the spelling will be cleared up.

We’re all familiar with Edgar Allan Poe’s short story The Tell-tale Heart, and so is Dylan.

Got a tell-tale heart, like Mr. Poe
Got skeletons in the walls of people you know.

Perhaps Dylan has some secrets in his closet (or in this case, walls). Perhaps those secrets bother his conscious like the beating heart under the floorboard terrifies Poe’s murderous character. Wouldn’t we all like to know what Dylan’s secrets are?

“I paint landscapes, and I paint nudes” is certainly self-referential. Dylan has long been an amateur artist. His efforts in this area have been well-publicized in recent years. He created the cover for two of his albums, Self-Portrait and Planet Waves.  Yes, he does both landscapes and nudes. 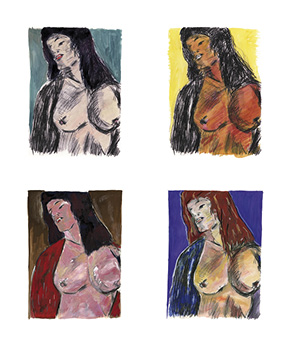 “Red Cadillac and a black mustache” is a reference to a song made famous by rockabilly artist Warren Smith. Smith recorded for Sun Records around the same time as Elvis. Bob Dylan recorded a version of this very song for a Sun Records tribute album.

“Tell me, what’s next? What shall we do?” is likely a reference to Carl Sandburg’s The People, Yes.

From the four corners of the earth,
from corners lashed in wind
and bitten with ram and fire,
from places where the winds begin
and fogs are born with mist children,
tall men from tall rocky slopes came
and sleepy men from sleepy valleys,
their women tall, their women sleepy,
with bundles and belongings,
with little ones babbling, ”Where to now^
what next?”‘

Dylan stopped by Sandburg’s house during his famous road trip to New Orleans in 1964. Dylan gave him a copy of his recently released album, The Times They Are A-Changin’.

“Oh, while I cannot frolic with all the young dudes” is a humorous reference to David Bowie’s song made popular by Mott the Hopple. Yes, Dylan is a bit long-in-the-tooth, not to mention of the wrong sexual orientation, to be frolicking with the young boogaloo dudes. Humor is an underrated aspect of Dylan’s work.

“I’m just like Anne Frank” is points out that he was born Jewish, another of his many “multitudes”. He’s also a bad boy, like the “Rolling Stones”. Note the blues boasting.

“I sing the songs of experience like William Blake” is a reference to Blake’s famous book of poems from 1794, Songs of Innocence and Songs of Experience. The first section – Songs of Innocence – is written from the perspective of an innocent child, while the second is from that of an older person. At this stage of his life, Dylan is taking the later perspective.

Dylan consulted on Allen Ginsberg’s effort to put Blake’s poems to music. Ginsberg said that Dylan didn’t like Blake and that his inspiration to make the record was in part to “lay Blake on him”.

Dylan’s song Every Grain of Sand was clearly influenced by Blake. Ginsberg’s efforts appear to have worked.

Could it be that the line “everything is flowing” is evidence that Dylan has an interest in physics?  Or maybe yoga?

“Pink pedal pushers” is a reference to the Carl Perkins song of that name. Perkins, also an early Sun Records artist,  went on to become a well-known rockabilly star. He is best remembered for his rendition of Blue-Suede Shoes. Dylan and Perkins co-wrote a song together – Champaign, Illinois – in 1969. Pedal pushers were a type of woman’s pants popular in the 50s, similar to what we now call capris.

“Pretty maids” could be a reference to any number of folk songs that employ that lyrical trope. Dylan has used it before, in Red River Shore, a Time Out of Mind outtake.

“I carry four pistols and two large knives” is more blues boasting, and also is a direct quote from a book, American Gothic by Gene Smith. Smith himself is actually quoting Shelby Foote, the historian featured in the Ken Burns documentary on the Civil War. Dylan has long expressed an interest in the Civil War.

I would argue that most of the borrowings – and I’m not saying Dylan actually read Smith or Foote’s books – Dylan has done over the years are not plagiarism. It’s all part of the “folk process”, a time-honored tradition. With all the hubbub in the past about Dylan borrowing, he must have been very aware that somebody would make this connection. I’m assuming he’s having a bit of a joke with us. Or perhaps the line simply stuck in his subconscious and came out during the writing process.

“I sleep with life and death in the same bed” is very close to the line below, often attributed to Lao Tzu.

Life and death are one thread, the same line viewed from different sides.

This isn’t the first time Dylan has referenced eastern thought. The line “I threw I Ching yesterday” is included in an early version of Idiot Wind. In a 1965 interview, Bob Dylan stated that the I Ching is “the only thing that is amazingly true, period…besides being a great book to believe in, it’s also very fantastic poetry.”

Almost done, one more line, “I play Beethoven’s sonatas and Chopin’s preludes”. Chopin and Beethoven were considerably different in their music styles. Dylan likes both, for he “contains multitudes”.

Well, I hope that was as fun for you as it was for me. Give us some more, Bob.

Today and tomorrow and yesterday too
The flowers are dying like all things do
Follow me close – I’m going to Bally-Na-Lee
I’ll lose my mind if you don’t come with me
I fuss with my hair and I fight blood feuds . . . I contain multitudes

Gotta tell tale heart like Mr. Poe
Got skeletons in the walls of people you know
I’ll drink to the truth of things that we said
I’ll drink to the man that shares your bed
I paint landscapes – I paint nudes . . . I contain multitudes

A red Cadillac and a black moustache
Rings on my fingers that sparkle and flash
Tell me what’s next – what shall we do
Half my soul baby belongs to you
I rollick and I frolic with all the young dudes . . . I contain multitudes

I sing the songs of experience like William Blake
I have no apologies to make
Everything’s flowin’ all at the same time
I live on the boulevard of crime
I drive fast cars and I eat fast foods . . . I contain multitudes

Pink pedal pushers and red blue jeans
All the pretty maids and all the old queens
All the old queens from all my past lives
I carry four pistols and two large knives
I’m a man of contradictions and a man of many moods . . . I contain multitudes

Get lost Madam – get up off my knee
Keep your mouth away from me
I’ll keep the path open – the path in my mind
I’ll see to it that there’s no love left behind
I play Beethoven sonatas Chopin’s preludes . . . I contain multitudes