I guess you could say that From a Buick 6 is the closest thing to filler on Highway 61 Revisited. It doesn’t really break any new ground, the use of language is nothing we haven’t seen before, and it doesn’t have the most memorable melody or beat. However, I think that says more about the high quality of Highway 61 than it does about the quality of this song.

From a Buick 6 is clearly a blues song at heart. It follows the typical blues chord structure, it repeats lines, and it deals with the same woman-trouble themes as do so many blues songs. Many have noted its similarities to Sleepy John Estes’ Milk Cow Blues.

Dylan frequently gave nonsensical names to works-in-progress. According to Michael Krogsgaard in an article in the Dylan fanzine The Telegraph, the song was at some point named Lunatic Princess. It is possible that Dylan simply substituted one crazy name for another and it really has no other meaning. 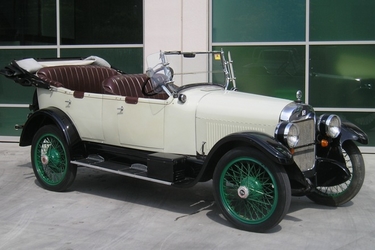 A more interesting possibility is that Dylan is pointing out the debt this song has to old blues songs. According to Andrew Montgomery in his book On the Road: American’s Legendary Highways, the Buick car company produced a model called the “Buick 6” from 1914 to 1930. Given that many of the old blues songs that Dylan has mined so well were being written during that time frame, it is not beyond the realm that Dylan wanted the title of the song to bring to mind that time period.

Most commentators – including Paul Williams and Robert Shelton – interpret the lyrics of the song as a tribute to a woman, an “Earth Mother” type who takes care of her man, putting a “blanket on his bed”. I don’t see it quite that way. It seems to me that there are two distinct women in this song: his “graveyard” woman who keeps his kids (i.e. his wife), and his “soulful mama”, a mistress who knows what he wants (i.e. his mistress).

The key word is “but”, which clearly tells the listener that the narrator is singing about two distinct women. To me anyway, Buick 6 is clearly a cheating song, similar to Stuck Inside of Mobile with the Memphis Blues Again in which his  mistress says “debutante knows what you need/ but I know what you want”.

The lyrics contain some brilliantly off-the-wall lines, including two of my favorites:

There are so many lifeless people around the narrator that it will take heavy equipment to remove them, and there’s so much confusion in his mind he needs a big truck to carry his mental anxieties away. Both funny and profound at the same time. What a wonderful way to describe a troubled mind!

Dylan played From a Buick 6 a few times during a tour just after his electric debut at Newport. Never played again. An alternative version with an extended harmonica intro was released on the Japanese version of Highway 61.

Well, when the pipeline gets broken and I’m lost on the river bridge
I’m cracked up on the highway and on the water’s edge
She comes down the thruway ready to sew me up with thread
Well, if I go down dyin’, you know she bound to put a blanket on my bed.

Well, she don’t make me nervous, she don’t talk too much
She walks like Bo Diddley and she don’t need no crutch
She keeps this four-ten all loaded with lead
Well, if I go down dyin’, you know she bound to put a blanket on my bed.

Well, you know I need a steam shovel mama to keep away the dead
I need a dump truck mama to unload my head
She brings me everything and more, and just like I said
Well, if I go down dyin’, you know she bound to put a blanket on my bed.